Here is the press release of an exciting new film being released today.

NOTE: Oscar®-Winning Director Alejandro Iñárritu and Other Prominent Hollywood Figures In-Person with the film’s directors Marc J. Francis and Max Pugh for the Premiere Screening and Walking Meditation with Monastics

Who is Thich Nhat Hanh? And What is Mindfulness?
What is the Value of Meditation? 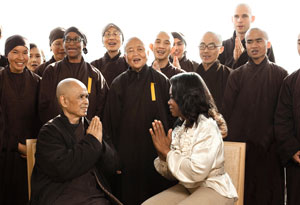 Directors Alejandro Inarritu, Alfonso Cuarón and Actor Benedict Cumberbatch Have Been Inspired by His Work

Salesforce CEO Marc Benioff Has Been Deeply Inspired By Him

OPENS IN TUCSON, ARIZONA ON SEPTEMBER 15 AT THE LOFT

PLUS OVER 300 THEATRICAL ON DEMAND SCREENINGS ARE SCHEDULED FOR TUESDAY, SEPTEMBER 12 AT MAJOR MOVIE THEATER LOCATIONS NATIONWIDE

A CINEMATIC JOURNEY
INTO THE WORLD OF THICH NHAT HANH

A SERIES OF EVENTS DURING OPENING WEEKEND HAVE AN IMPORTANT THEME: IN A TIME OF INCREASING POLITICAL DIVISIVENESS HOW DO WE FIND A WAY TO FIND PEACE IN OUR BEING? HOW DOES ONE CONTROL ANGER? 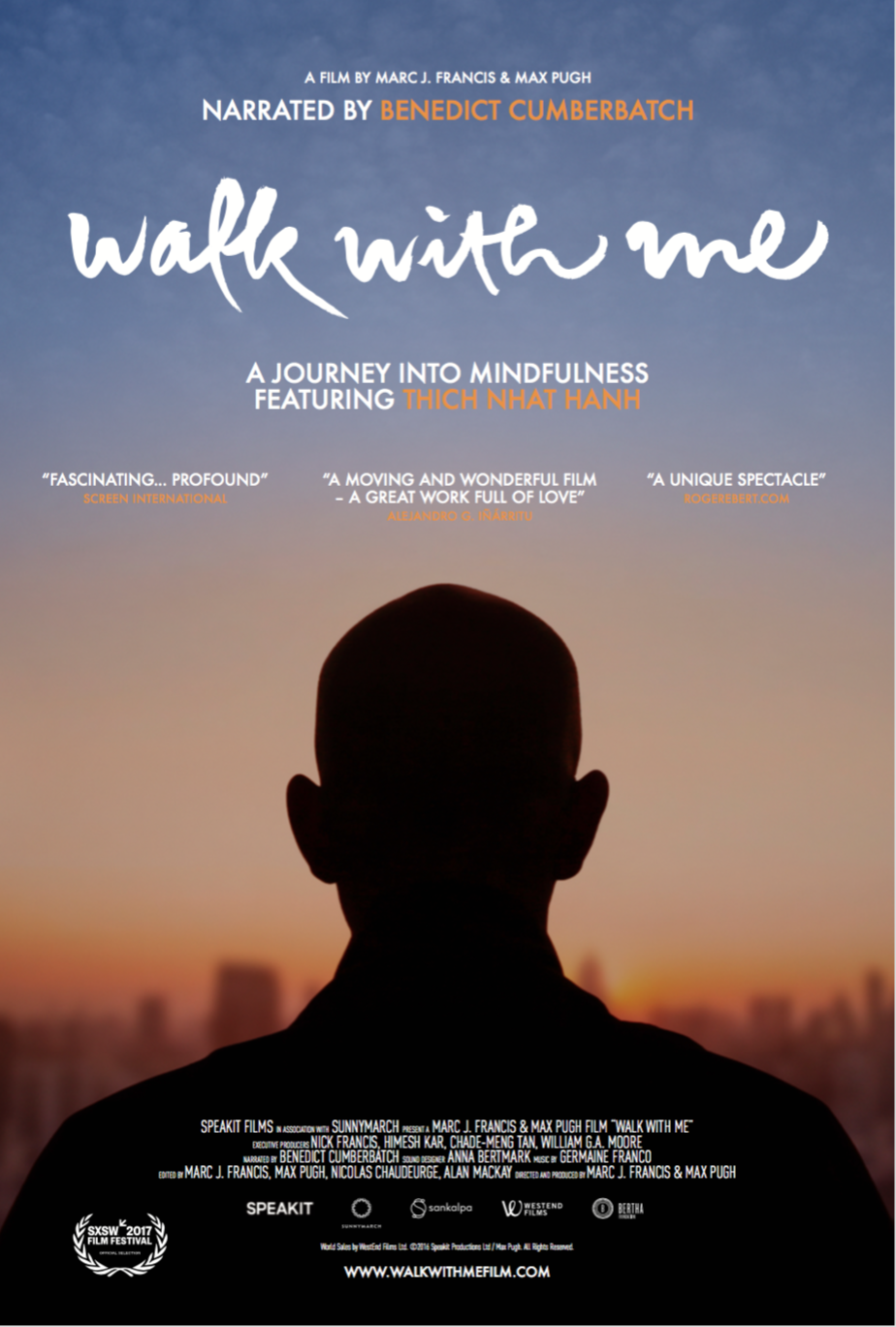 “A unique spectacle – a thoroughly meditative piece of cinema.”
– RogerEbert.com

Gathr Films and Kino Lorber Inc. present the New York City premiere of the film WALK WITH ME, a cinematic journey into the world of mindfulness of Zen Buddhist master Thich Nhat Hanh, narrated by Academy Award nominee Benedict Cumberbatch.

The documentary feature will screen in New York City at the Rubin Museum of Art from August 18 through August 26. It is now playing in San Francisco at the Rafael Film Center, where it has been held over.

Then it will be released in theaters across the United States via Theatrical On Demand screenings. Nearly 200 theatrical bookings nationwide have already been booked for the film’s theatrical-on-demand expansion.

The film received its world premiere at 2017 SXSW FILM FESTIVAL earlier in the year.

Filmed over three years and with unprecedented access, this visceral film is a meditation on a community who have given up all their possessions for a monastic life in rural France. 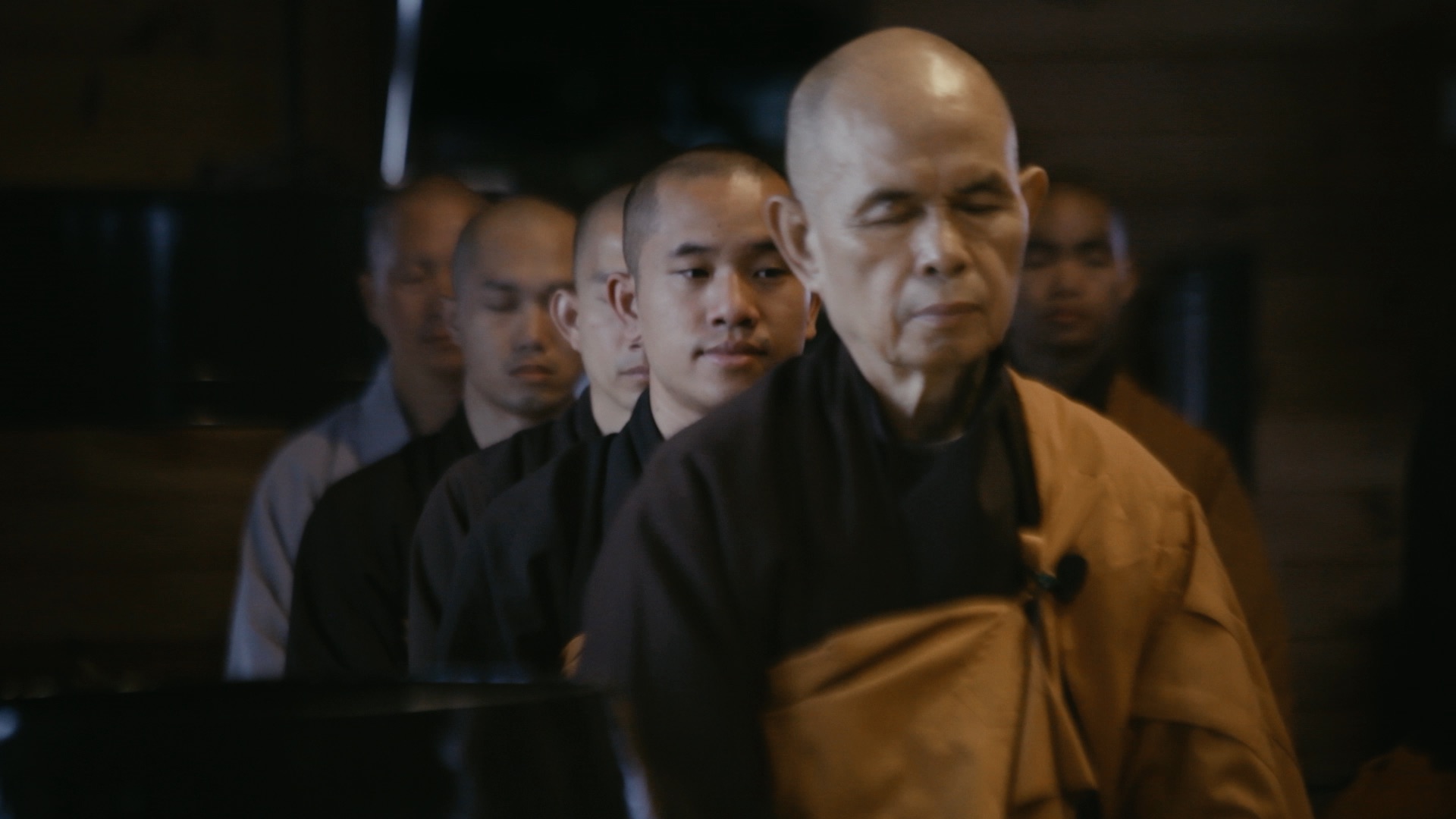 “In my life I’ve been so touched by the teachings of Thich Nhat Hanh,  it was a great honour to work on ‘Walk With Me.’ I have no doubt that audiences across the world will be moved by this beautifully crafted film observing the daily life of the monks and nuns who have committed their lives to the art of mindfulness”
– Benedict Cumberbatch

“A moving and wonderful film that captures the essence, depth and the poetry of Thich Nhat Hanh … a great work full of love.”
– Alejandro G. Iñárritu 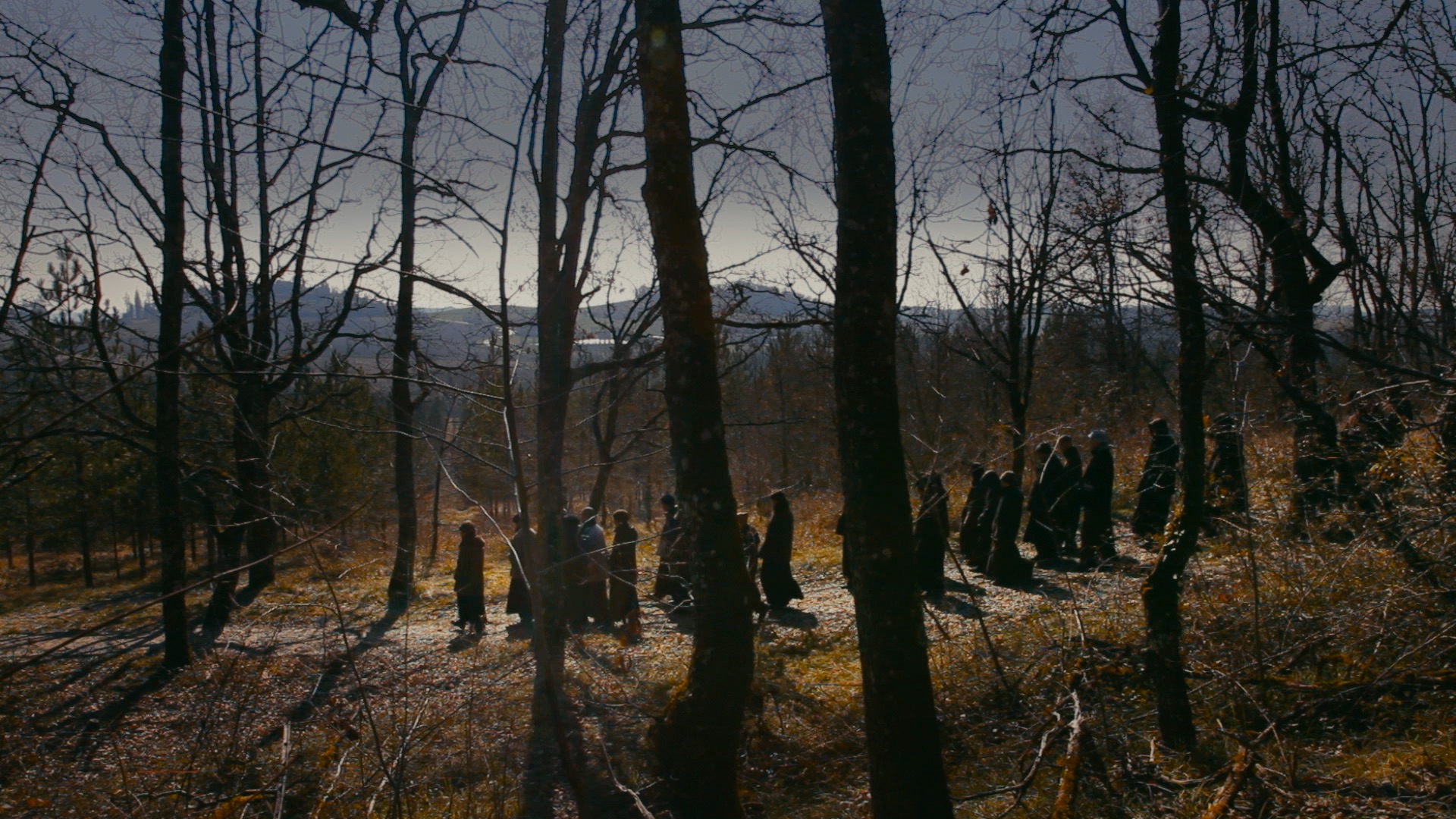 There will be a weekend of special event screenings at the Rubin Museum as part of a one week run of the film starting August 18. Jo Confino, Executive Editor of Impact & Innovation at “Huffington Post” will introduce selected screenings throughout the weekend with monastics opening each film inviting viewers to breathe and relax with the sounds of a meditation bell. Q&A’s with filmmakers and monastics from Thich Nhat Hanh’s Plum Village monastic community will follow each screening and meet and greets with monastics will be held throughout the weekend.

Filmmakers’ Statement – Marc J. Francis and Max Pugh
“Taking our time with the film process has allowed for the chance to develop a cinematic ‘language’ capable of communicating the actual practice of a life lived differently and mindfully. We have worked to create an immersive film to plunge the audience deep into the poetry of the present moment, a feeling so elusive in the reality of the daily grind. If you can allow yourself to breathe with the rhythm of Walk With Me, let go, and relax, you can experience the film as a meditation. Movie theaters offer the best conditions for this experience; where the big screen, surround sound and the collective energy of the community can come together in one moment in time.”

Synopsis
With unprecedented access, Walk With Me goes deep inside a Zen Buddhist community who practice the art of mindfulness with their world-famous teacher Thich Nhat Hanh.

Filmed over three years in their monastery in rural France and on the road in the USA, this visceral film is a meditation on a community grappling with existential questions and the everyday routine of monastic life.

As the seasons come and go, the monastics’ pursuit for a deeper connection to themselves and the world around them is amplified by insights from Thich Nhat Hanh’s early journals, narrated by Benedict Cumberbatch.

About Thich Nhat Hanh
Widely acknowledged for introducing mindfulness to millions of people in the western world is 90 year old Buddhist Zen Master Thich Nhat Hanh. Today, he is avidly followed by world leaders in politics and business, particularly by CEOs in Silicon Valley, and by stars of stage and screen, including Oprah Winfrey who has twice invited him on her show.

Nominated for the Nobel Peace Prize by his friend Martin Luther King Jr., Thich Nhat Hanh is also a human rights activist, poet and successful author. His books have become worldwide bestsellers and he has over a million followers on Facebook.

In 1982, Thich Nhat Hanh set up Plum Village – a monastery in rural France for monks and nuns to live, and for lay people from across the world to engage in mindful practice. His community is one of the single largest Buddhist monastic communities in the world. 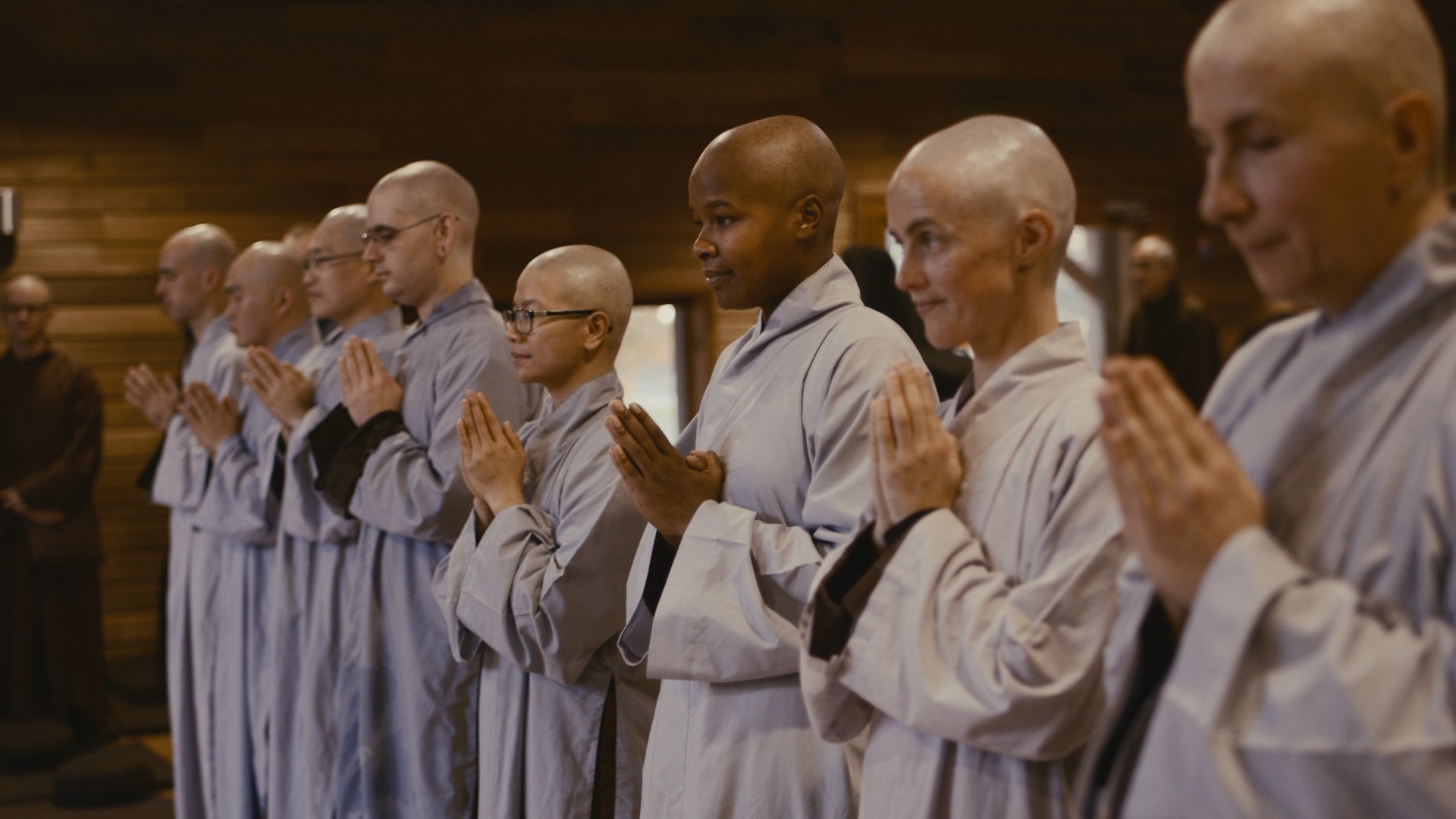 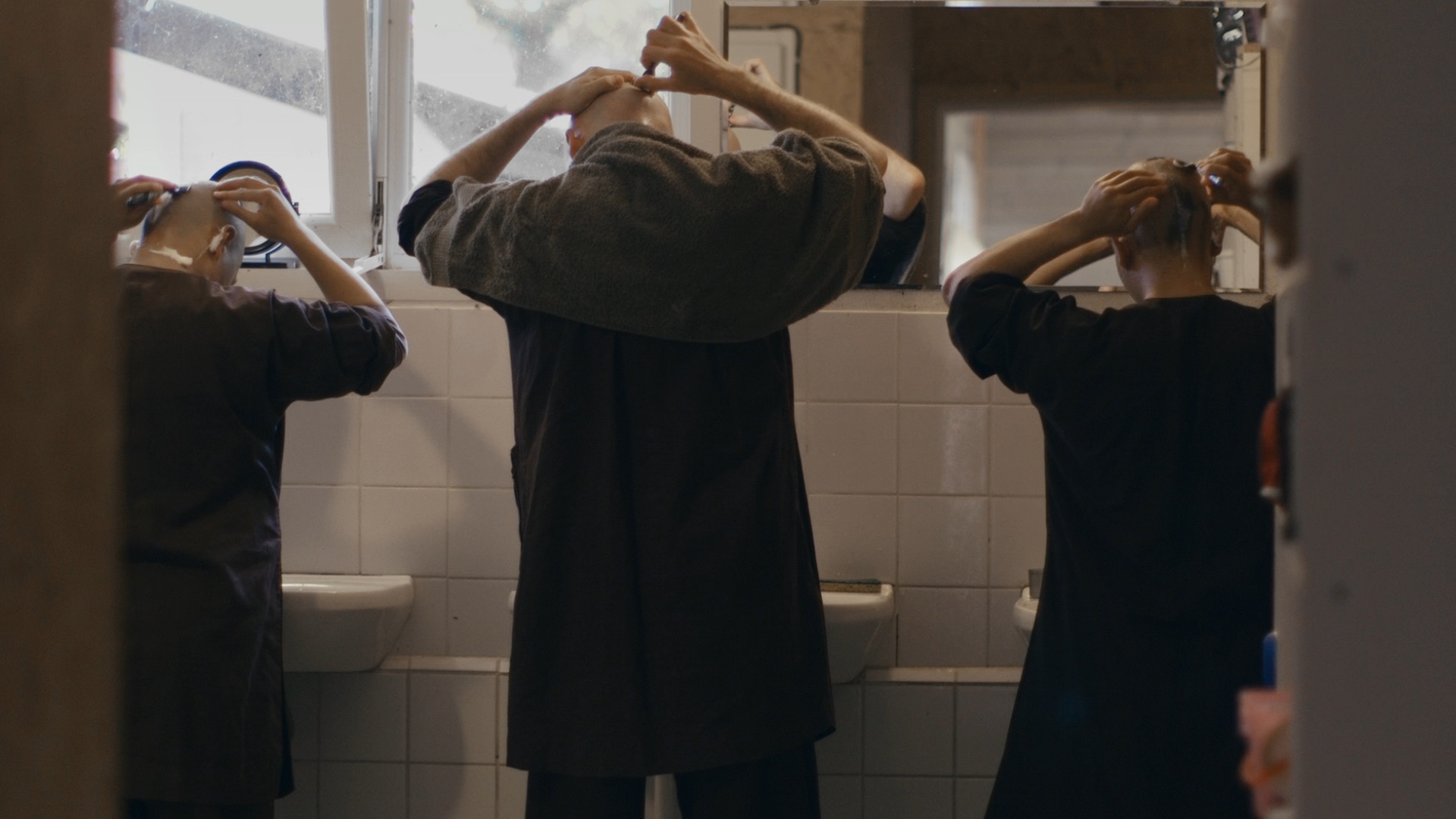 WALK WITH ME
2017, United Kingdom, Unrated
Runtime: 94 min.
In English, Vietnamese, and French with English subtitles.