This attractive, sparkling orange- golden stone belonging to the feldspar family is associated with the brightening qualities of the sun. Sunstone is also known by the name of Heliolite, which is a Greek word that translates to ‘sun’ (Helios) and ‘stone’ (Lithos). It is one of the rarest stones found on earth, which makes it all the more valuable and an absolute must-have!

Sunstone is not the traditional birthstone of any month; however, it is the natural birthstone of the people born in midsummer i.e. from July 22 to August 21. It is also considered a powerful stone for people born under the zodiac sign of Virgo. It is known to bring out their sensual side.

Sunstone is a type of Labradorite, which is a feldspar mineral. It is formed due to the cooling of basaltic lava, just like Peridot. Sunstones have a unique property known as the ‘schiller’ effect, which causes reflection of light due to metallic inclusions mainly through copper.

These precious stones are extremely hard to find. Oregon in the United States is the most common place where these stones are found in large deposits. Majority of the stones obtained from this place exist in yellow color; however, there are some exceptional pieces that appear in red, green-red, peach, and pink color as well. 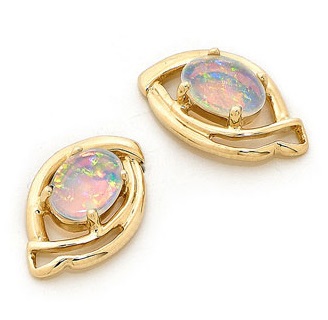 Sunstone is one of those precious stones that were used by Vikings to find the direction in the sea in the non-sunny days. One such stone was discovered at historical Viking sites – a British shipwreck – which suggested that the claim was not baseless; and so evolved the myth of the famous Viking Sunstone.

Until 1800s, this gemstone was considered extremely rare. Very few people knew of its existence and therefore, it was considered very valuable. It became common after its discovery in Oregon.

The Native American legend states that the Oregon sunstone acquired the characteristics of strength and power when a wounded soldier spilled blood drops on the stone; hence making it an ideal stone for warriors. A museum in Jacksonville, Oregon carries a wide collection of sunstones in the Indian artifacts section.

Now this stone is mined in large quantities from Oregon, polished and cut into delicate shapes, and sold to the jewelers for creation of unique jewelry.

The sunstone is attributed to the Welsh goddess of knowledge and inspiration, Cerridwen. She is known for her unique powers of magic and prophecies. She controls the spiritual transformation, death and rebirth. This precious stone is also used for honoring the Egyptian goddess of war, Sekhmet. She is usually symbolized by a lion’s head placed on a woman’s body.

This stone is known for attracting love and other positive energies. It can relieve its wearer from burdening relationships and cleanse their aura. Hence, the sunstone is good news from every perspective! People who face difficulty in achieving goals due to internal fears and self doubt can benefit greatly from the healing powers of sunstone. It promotes broadmindedness and new ideas, highlighting the creative aspects on one’s personality.