Square Enix has announced that they are launching Live Interactive Works (LIW) as a community development project that allows established streamers and content creators to aid in the creation of their new games. Those accepted into this playtest will be able to play the games while they are still in development and give feedback on what could be improved.

“Your opinions will be reflected in the game, and you will be able to see how the game is being improved based on your inputs. In addition, the development meetings can be freely broadcast on video or other media!

We aim to create a new form of game development where people can experience real development and communicate it to the world!”

Those who get into this project will have access to the first project on the list called “Gluttony.” The game is described as a panic movie that has been turned into a game, where the monsters in the game prey upon humans. This forces humanity to band together to defeat the rampaging monsters from swallowing their world whole. While that may sound terrifying, the monsters are actually pretty cute, making it much less scary than it sounds. They say that the game’s graphics are still a work in progress and that the goal is to work with their playtesters to create a unique gaming experience.

For the most part, the LIW project seems to be more catered to those in Japan, as their instructions for joining are written in Japanese, via an image. Here’s what they direct those interested to: 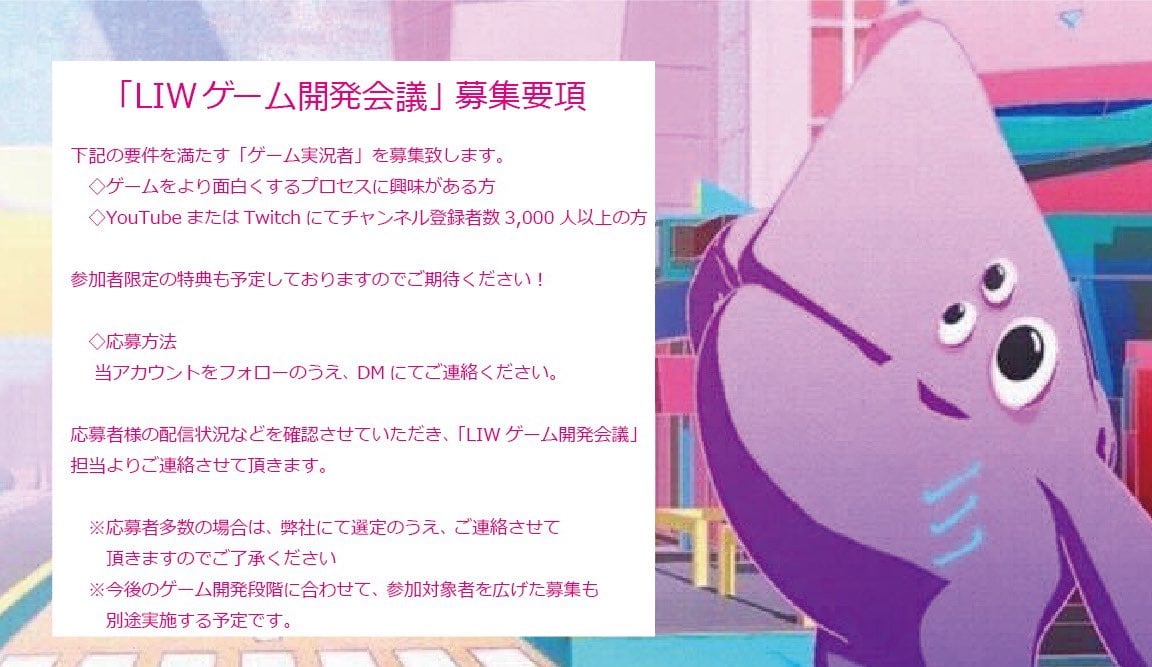 While we aren’t saying that they are only interested in Japanese creators, images like this may mean they are more focused on creators located in Japan.

Projects like this seem to be on the up and up, as developers such as 100 Thieves and DrDisrespect have also recently come out with their own community development projects. ‘Project X,’ created by 100 Thieves, is a development project centered around not building their upcoming game in secret. They want the community to be involved, as they are actively looking to hire individuals to give them feedback on what may need to be changed before release. Similar to this is DrDisrespects project, Midnight Society. Every six weeks, Access Pass holders within the Midnight Society will receive access to gameplay screenshots for them to discuss. This provides feedback that the developers will then consider while they continue to create their games.

For those who would like to join in on Square Enix’s playtests, they will need to meet two requirements:

They explicitly mention that they are looking for gaming influencers at this time but will be expanding their target audience for future game development stages.

How to uninstall Genshin Impact from your PC