Skip to content
In 5th grade my English teacher taught us all to spell the word triskaidekaphobia. (Try to say that 3x fast! )
And almost instantly, I remember being enthralled by the phonetics of this faaaancy-shmaaaancy word that I didn’t know the definition to.

“What an EXOTIC word!” I thought to myself.

And that same day I remember going to the library, dropping everything, running to the nearest computer, and looking up the definition. Well….I probably wasn’t running because after all I was at a library. It was more like speed walking…..but you get the point.

​Anyways, I propped myself on this seemingly gigantic chair that swallowed me whole, and stared at the screen as I read: 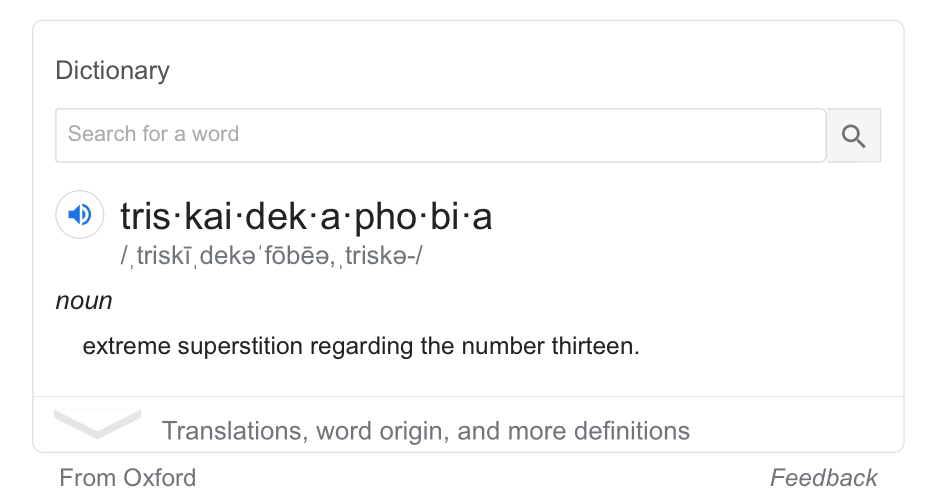 You could imagine the shock on my face. I don’t mean to be dramatic, but at that point I FELT BETRAYED BY…THE ENTIRE ENGLISH LANGUAGE! Because for some odd reason, I had this crazy idea that the word meant something completely different than what it actually did.
Needless to say I was very disappointed, which in itself is a little silly. But you can’t blame me, I was only 9!
Nonetheless, I learned to spell this aesthetically sounding word.
But I kid you not when I say that: “Not in a million years did I think my excellent spelling skills would ever come in handy!”

And yet here we are!
So, thank you Mrs. Heilman!
​ 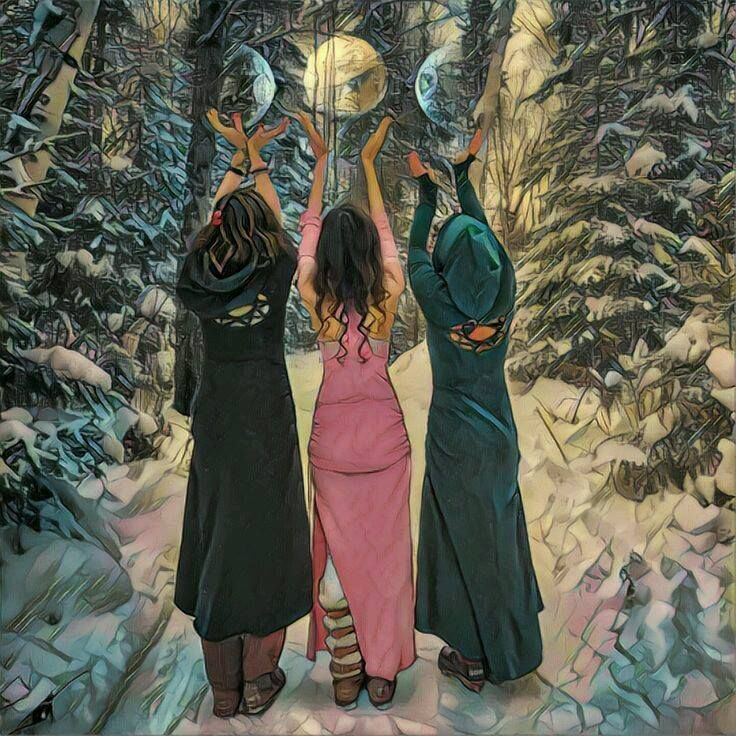 For as long as I can remember the number 13 has been unlucky. Like how almost all Americans have this collectivized hatred for Friday the 13th. And how you almost never encounter a 13th floor on an elevator. This directly stems from western superstition.

​Many often associate Friday the 13th, with the disturbing hockey mask-wearing Jason Vorhees running through Camp Crystal Lake bent on slashing unsuspecting teenagers with a gigantic machete. And while this may be true in horror movies……it is certainly NOT true in real life. In fact, Friday the 13th is deemed unlucky because of the historical patriarchal forces that were deathly afraid  of the sacred feminine, or women in that day who might have had some sort of influence on their male-dominated ruling structures.

​ANDDDDDDDDDD………….
What better day to discuss the sacred feminine and the history of Friday the 13th than today (FRIDAY THE 13TH!) in a way to dismantle patriarchal teachings? Let us all unlearn!
​

THE HISTORY OR SHALL I SAY HERSTORY
​of the sacred feminine

Credit to @PICHULIK
What is Friday the 13th?
Friday the 13th occurs when the 13th day of the month in the Gregorian calendar falls on a Friday, which happens at least once every year but can occur up to three times in the same year—like in 2015.

The word Friday is derived from the Latin term ‘dies Veneris’ which translates ‘Day of Venus.’
A simple Google search will tell you that Friday comes from the Old English term Frīġedæġ, meaning ‘Day of the Frige,’ stemming from the German goddess Frigg, who is equated to the Roman goddess Venus.

And before patriarchal times, Friday the 13th was considered a sacred day of the Goddess. It was considered a day to worship the Divine Feminine that lives in us all and to honor the cycles of creation and death and rebirth. The number 13 is a feminine one. A woman’s average female (menstruation) cycle is 28 days, this equates to 13 female reproductive cycles over the course of 12 months or a year of 364 days.

Kimberly Lawson wrote that “A woman was considered to embody divine and magical powers when she got her period. She was regarded by all for her wisdom and ability to offer intuitive and psychic messages… It was only when society became more patriarchal that women were made to feel shamed when they were having their periods and to ignore their amazing potential to create and hold space for new life. This attitude has helped to contribute to the idea that Friday the 13th is an unlucky day.”

And with time Friday the 13th came to adopt a more negative connotation as…
Friday was also the day when Eve allegedly gave Adam the apple, and when Adam was cast out from Eden. It is a well-known story that portrays Eve as the aggressor and Adam as an innocent man who fell prey to Eve’s deception and ate the apple. Additionally, Jesus was killed on Good Friday, prompting many to further label the day as a negative one.

The number 13 also has a bad reputation because there were 13 people seated at the Last Supper, right before Jesus was to die. There is a religious superstition that any 13th person sitting down at a dinner table will die within one year. (which is completely bogus…because I have been the 13th person at a table….and well we know how that turned it…and needless to say I am ALIVE AND WELL!)

But all of this is all sooo….TABOO

In her 1976 book, The Curse: A Cultural History of Menstruation, Janice Delaney wrote that a taboo is a “supernaturally sanctioned law” under which something is “always seen as symbolically dangerous or otherwise defiling”. By marking Friday the 13th as dangerous and defiling we have transformed it from a date into a taboo. And, sadly, taboos can still be extremely dangerous. Look at Tanzania where last year 23 people in a single village were killed on suspicion of being witches. Look at India where menstruating women are often prohibited from visiting temples, cooking and even collecting water. Look to Saudi Arabia where women like Amina bint Abdulhalim Nassar can be beheaded on accusation of sorcery. Taboos, and the havoc they wreak, will exist for as long as we allow fear to slide into our lives.

And although there seems to be much more evidence to prove otherwise, Friday the 13th is in actuality a sacred feminine day. A day to celebrate the woman. On this day with Goddess’ energies doubled, considering the lucky blend of just the right conditions, chemistries, elements, and energies, the woman has the power to work her magic!

So, let us all come together and celebrate Friday the 13th as the day of the sacred feminine.
AND LISTEN TO SOME TUNES LIKE “THE DIVINE FEMININE BY MAC MILLER” to celebrate!

I actually found it quite fitting that this year’s Friday the 13th was in March which so happens to be Women’s History Month (WHM for short)! (post coming on that soon). And that was the universe telling me that I HAD TO POST THIS!
For the sake of women and our history!

With that in mind…please know that the Upstart community supports and cares about each and everyone of you, and we send our best wishes for the health of your loved ones amidst the corona virus outbreak. Wishing you all the best!

And as always I’ll be….
Always smiling and beyoutiful,

Make These Easy Snowflakes for a Snowy Garland