The passing of the
Buddha as described in the Mahāparinibbāna Sutta is one of the most
interesting, not to say moving, text in the Tipitaka. Despite its composite nature
and somewhat artificial language it transmits the very real drama and pathos of
this momentous event. Not surprisingly, throughout history the ‘Great Decease’
had occupied the talents of a long line of sculptors, poets and painters. Most
of these are anonymous but one who is not is Hanabusa Itcho (1652-1724). A
versatile genius, Itcho excelled in calligraphy and haiku but is most widely known today for his paintings.  One of my favourites is his delightful
depiction of a cat cleaning itself on the roof of a tea house. He must have had
a playful nature as is suggested by the many satiric scenes he painted, an
example being his Blind Men Examining an Elephant illustrating the Buddha’s
famous parable from the Udāna 67-9. One work in which Itcho’s restrained his
playfulness is his famous The Death of the Buddha which he painted in 1713 and which
is now in the possession of Boston’s Museum of Fine Arts. Itcho used as his
guide to the contents of his painting the Mahāyāna Parinirvāna Sūtra, a text with a complex history.

Like many Mahāyāna sūtras it was added to over the centuries as new ideas evolved and
needed to be given a seal of authenticity by being put into the mouth of the
Buddha. In its present form the sūtra was probably composed in southern India some
time around 100-200 CE and is an elaboration of an earlier work, which in turn
was based on the Pāḷi
Mahāparinibbāna Sutta. One of the most striking parts of the Mahāyāna Parinirvāna
Sūtra is that which
describes all the animals coming to pay their last respects to the Buddha.
Itcho took full advantage of this incident to demonstrate his skill at realism and
observation, depicting elephants and peacocks, domestic chickens and beetles,
dragon flies and tortoises all mourning for the Buddha.  The Death of the Buddha became famous even during
Itcho’s own lifetime and records show that pilgrims  flocked to the temple where it was displayed
annually for 150 years to see it.

Right now the Museum
of Fine Arts and the Freer Gallary of Art have joined forces to repair and
conserve and Death of the Buddha,
which they call “the most important Buddhist painting of its time.” You can see
the ongoing conservation  here https://www.youtube.com/watch?v=pHfv1Jz0OXc 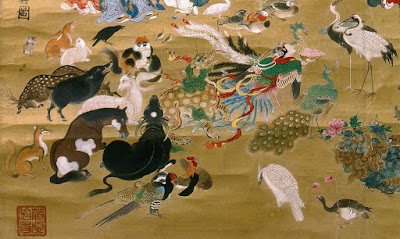